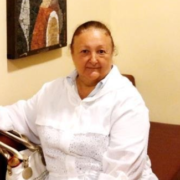 Professor at the Department of Translation and Intercultural Communication

Yanka Kupala State University of Grodno (YKSUG) is one of the major regional universities in Belarus comprising 15 faculties (63 departments) and four university colleges. One of the main goals of YKSUG is internationalization of education and science for improving its competitiveness. Therefore participation in international project activities is considered to be of the utmost importance.

During several Belarusian-Russian projects fulfilled on the Belarusian side under scientific supervision of the professor Liudmila Rychkova digital resources which include Belarusian special lexis and can be used for lexicography purposes as well as Belarusian language material for compilation of the dictionary of socially important lexis were created. As the focus  of the research is on gathering authentic language material both for Belarusian language and Belarusian variety of Russian (there are two official, called ‘state’, languages in Belarus, but the country is predominantly Russian speaking one) corpora based on the authentic texts of the bilingual regional newspapers have being built. Grodno region corpus was included into the module of regional and foreign press of the newspaper corpus in the frames of the Russian National Corpus. During last 4 years regionally distributed specialized language data base incorporating the texts of bilingual Belarusian newspapers is being created (for peculiarities see a short article in English).