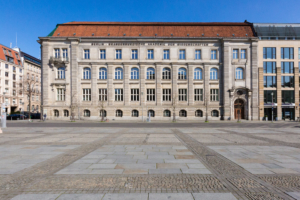 The Berlin-Brandenburg Academy of Sciences and Humanities (BBAW)

The Berlin-Brandenburg Academy of Sciences and Humanities (BBAW) is an association of outstanding scientists and scholars from all over the world with over 300 years of tradition. 79 Nobel Laureates shape its history. As the largest non-university Humanities research institution in the Berlin-Brandenburg area, it safeguards and showcases the region’s cultural heritage, but it reaches far beyond that. It hosts about 25 world-wide renowned long-term projects, including dictionary projects, editions, documentations and bibliographies.

Since its establishment, the Academy has placed particular emphasis on language documentation, including the Deutsches Wörterbuch by Jacob Grimm and Wilhelm Grimm, the Wörterbuch der deutschen Gegenwartssprache, and, more recently, the Digital Dictionary of the German Language (DWDS). In the context of the DWDS, the academy has been engaged in the compilation of large reference corpora including the German Text Archive (DTA). It has also been engaged in significant infrastructure projects as a leading centre of CLARIN with an emphasis on reference dictionaries and historical corpus data. Since January 1, 2019, the BBAW has been coordinating the Federal Ministry of Education and Research-funded Centre for Digital Lexicography for the German Language (ZDL), whose aim is to bring together the scholar expertise and resources of all historical and contemporary reference dictionaries of the German language from four different academies (BBAW, the Göttingen Academy of Sciences and Humanities (AdWG), the Academy of Sciences and Literature | Mainz, and the Saxon Academy of Sciences and Humanities) as well as the Leibniz Institute for the German Language.